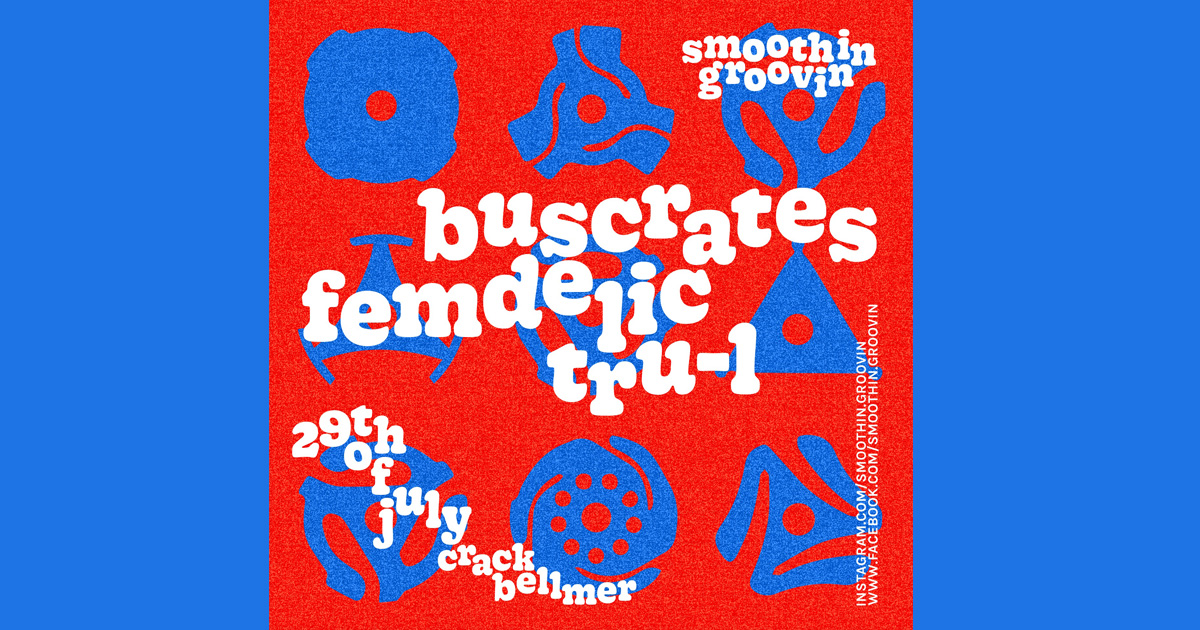 As Smoothin Groovin is getting ready for its 2nd anniversary, we're happy to welcome magnificent US collector, synthetist & producer Buscrates, who is coming to Berlin (& Europe!) for the first time at the end of this month! This might be the only chance to tour the Boogie Bus on European soil in the near future, so come join this fantastic ride!

Turning this into a memorable night, funky selector Femdelic & yours smoothly TRU:L will put that magic spell on the turntables, keeping the dancefloor hot all night long.

Buscrates is a DJ, musician, and vinyl junkie from the Steel City of Pittsburgh, Pennsylvania. Since childhood he has always gravitated to the myriad of sounds coming from the stereo system of his father, who did some DJing in the early 80s. Anything from Roy Ayers to Steve Miller to Gil Scott-Heron could be heard at home on a Saturday morning. A very young Crates had his first experience behind a set of turntables in the summer of 1986 when a local DJ at a party let him get on the turntables while doubles of Cameo’s “Word Up” 12-inch single spun on the Technics 1200s.

A deeper exploration of funk began as part of East Liberty Quarters, a trio consisting of Bus and two of his close friends Geeman and Nice Rec. They released 2 EPs on Rotating Souls Records and performed for the first time as openers for Dam Funk in 2011 at the now defunct Shadow Lounge in Pittsburgh.
Buscrates continued this exploration as a solo artist on his 6-track electro funk EP The Spectrum (Omega Supreme, 2014), which also features his ELQ cohorts. During this time he also had a grasp on his more hip-hop and soulful side, which can be heard in works with oft collaborator Mecca:83 from the UK, his production with Ian Wallace under the name Extra Medium, a solo all instrumental cassette tape release Home Again(Thrash Flow, 2017) and most recently on the joint effort with Portland based MC Libretto Eternal Ridin (Liquid Beat, 2019).

Femdelic is a creator with roots in Berlin. She used to host together with her DJ Crew a regular Funk Party 'COOL WHIP' with international modernfunk live acts and djs. Now she is travelling with her records through Germany, Europe and beyond, webbing her net of boogie funk, disco and Love. Femdelic shifts between the various delicious flavours of funk; electronic, boogie, breakdance, disco, modern styles, afro and more, with an all-knowing wisdom of what's good for the dancefloor, and when to take those left turns that create the magic moments!

Sibiu born, Berlin-based founder of Smoothin Groovin, Tru:L will spin a mosaic of sounds & rhythms perfectly fitted for both the dancefloor and the bedroom, taking you to a place of planetary Funk and beyond, seasoning her selection with unexpected records in her bag.